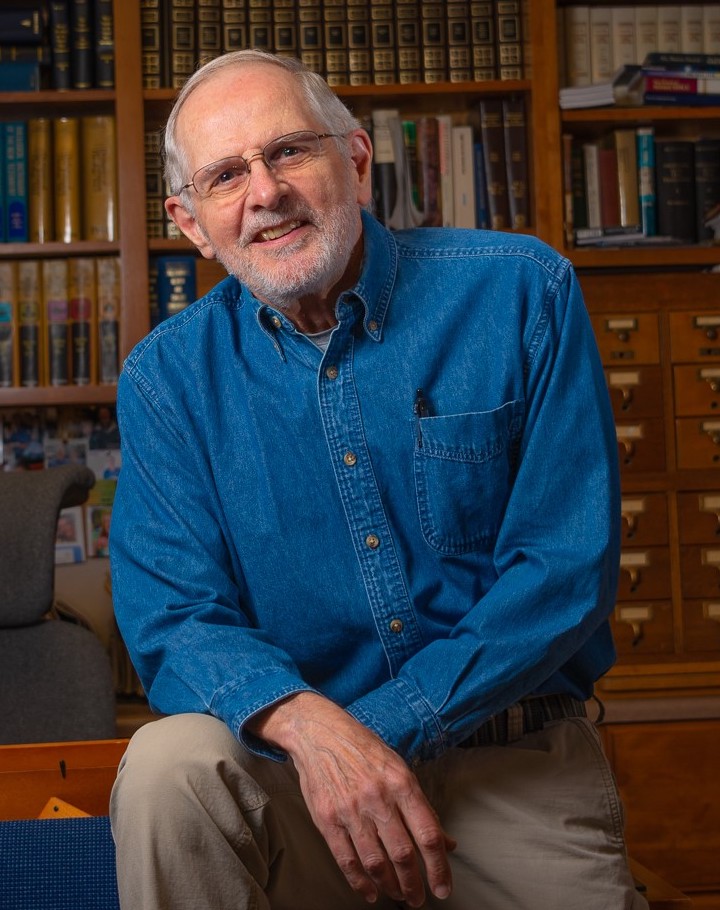 Steve has been happily married to Marla since 1974. God blessed them with three children and many grandchildren. Steve and Marla enjoy hiking and camping in God’s beautiful creation.

Steve’s sermons and articles have been published in a variety of forums and have been translated and reprinted in Polish, Swedish, Korean, Chinese, Czech, Slovak and Spanish. His printed and audio sermons from 1992-2019 are available on Bible.org, Precept-Austin.org, and SermonAudio.com, as well as Logos and WordSearch Bible software programs. He also has many of his sermon series in paperback or Kindle on Amazon.com (an ongoing project in his retirement). He continues to serve at Flagstaff Christian Fellowship and is available to speak at churches, Bible conferences, men’s retreats, etc. You can email him at scole@fcfonline.org.

In 1991, FCF began the search process to find a replacement for Al Parmenter, who had been our Pastor for 15 years. I was the Mission Deacon at that time and member of the search committee. Steve was one of our top two candidates, and at the last minute the other candidate removed his name!  Steve was quickly approved by the committee and came to the church in 1992.  For over 26 years he faithfully preached the word of God.  These are the 6 attributes I most appreciate about Steve.

FAITHFUL PREACHING OF THE WORD OF GOD

We found out rather quickly that the preaching of the Word stirred up controversy! While some in the body were highly offended, I, along with many others, were being highly convicted. Those who opposed him found that he could not be pressured, threatened, intimidated, manipulated or coerced! Steve was faithful to the Word through his entire pastorate. My daughter Lisa who was in middle school when Steve arrived said recently, “Steve’s sermons as a young person gave me the capacity to take in deep spiritual and theological truths for my entire life. I still have a hunger and desire for scripture.” Lisa has a powerful discipleship ministry to high school and college students in Muncie, Indiana. One of her students is currently at NAU and serving as a college intern at FCF.  My oldest son, Mike, was 11 when Steve came to FCF. Mike is now the lead pastor at Faith Church in Rio Rancho, New Mexico.  He said, “Steve modeled faithful expositional preaching and the seriousness of preaching the word irrespective of how people would feel about it.” Steve’s sermons were printed and thousands of them distributed in a number of ways. All 26 years of sermons are still available on the FCF website, (under Pastor Emeritus Steve Cole) Bible.org and preceptaustin.org.

DEVOTION TO HIS WIFE AND CHILDREN

Steve was devoted to his job as a pastor, but it never overtook his devotion to his wife, Marla, and their three children. Steve was off the radar from Sunday night till Tuesday morning. He would spend every Monday with Marla and his children, when they were not in school. They would go hiking, backpacking or some other outdoor activity.  The family never missed out on vacations as Steve was diligent to make sure those happened.  Steve modeled what it was to be a godly husband and father.

FCF has a long history of being involved with outreach to the college students. One of the most appealing things about FCF to Steve was our close proximity to the NAU campus.  Steve felt that college students were at an impressionable age and that decisions made during that time had lifelong consequences. He wanted to have an influence on that age group and he did! Many students found Christ while at NAU. Some went on to become pastors, or missionaries, and hundreds continue to walk with the Lord, raising godly children and serving in their churches around the world.

Steve arrived at FCF with a strong conviction and commitment to world missions. He was supportive of all the missions activities already in place.  He frequently used a missionary story to conclude his sermon. He encouraged people to pray for missionaries and promoted reading about missions for people to have a greater understanding of the needs around the world. He especially encouraged reading missionary biographies. He was willing to give time in the service for reports from missionaries and occasionally gave the report himself. Sunday evenings were often devoted to missionary presentations. I had many, shall we say, “unconventional fund-raising schemes.” While Steve groaned over many of them, he still supported and even promoted them!

THE MOST SELF DISCIPLINED MAN I HAVE EVER KNOWN!

You could set your watch by Steve Cole. He arrived Sunday morning, on his bike, at 8:30, Sunday evening at 5:50.  His sermon was finished by noon on Thursdays.  He was locked up in his office working on his sermon from noon on Tuesday till the weekly sermon was completed. If you sent an email, you would get a reply within a half hour. He accomplished a great deal because he was so self-disciplined.

Steve has a quiet and dry sense of humor that I think most people miss. You have to pay attention and listen for it.  Sometimes he is not trying to be funny.  Here are some examples: in a sermon, he was speaking about a girl he had gone on a date with before he met Marla, “I picked her up at 7 and at midnight it was 8:30.”  In other words, I was done with this girl, but it was too early to take her home. While setting up the craft sale, chairs had inadvertently been stacked in the hall. Steve called out, “Julie, when you barricade the men’s restroom, you have gone too far!”

One day he walked into the kitchen and said to the group of women working there, “Do you know what you call a younger woman who marries an older man? A nurse, because us old geezers aren’t going in the right direction.” I had just returned from the Chapel of the Holy Dove and saw Steve, Stan and Dan preparing for the staff meeting. I poked my head inside the door and said, “I was just at the Chapel and a visitor asked me if I was the pastor. Stan smiled and chuckled.  Dan burst out laughing.  Steve looked at me, dead serious, and said, “What did you tell him?”

What a joy and blessing for me to be at FCF for 46 years!  Thank you, Steve, for the influence and impact that you have had on my life, the lives of my children and hundreds of thousands of people around the world!